Bullying has been in the news a lot lately due to the advent of school shootings. The truth is there is no evidence that school shootings are being done by bullies. But, it is starting the conversation to encourage teachers, students, and parents to deal with the bullying problem rampant in schools and society today.

This may seem like a no-brainer, but you’d be shocked to learn that there are people out there who blame the victim for being bullied. They’ll claim with no facts to back it up that the child must be doing something to cause the other kids to bully them. But, usually, this is not the case at all. And if it was true, wouldn’t bullies get bullied?

Instead, make sure that you tell your child that they aren’t to blame and that it’s not their fault. It’s never the victim’s fault about what happens to them. Bullies choose any convenient target to attack and tend to keep picking on victims that react in a way that they like, but that doesn’t make it the victim’s fault.

Don’t Joke About It

Some parents and siblings think that it’s best to make light of the situation, but the truth is it’s one of the worst things that you can do. For a child who is being bullied, their life becomes a horrible ordeal that they must get through whenever they are just doing the normal things they need to do each day, like go to school.

Instead, take the child seriously and let them know that you take it seriously. Comfort them and encourage them to realize that if others are teasing them, it’s not something you think is funny or that anyone should think is funny.

While it would be nice if class sizes were smaller, the truth is most educators have no choice but to try to control and teach 30 kids in a class (and even more in some places). This makes it hard to notice everything that is happening. That’s not an excuse; it’s the reality of where we are with education, at least in the USA.

What you can do instead is talk to the teacher, the principal, and other interested parties and try to craft a plan to address the problem in a way that helps your child. The main thing is to show everyone that the bullied child is supported and that bullying will not be tolerated in your school.

Even if your child is embarrassed by the situation, don’t hide it from the school or anyone. If it’s open knowledge that a certain child is bullying your child, even other kids will start to realize that this is not a good thing, and the bully may stop just due to positive peer pressure. This openness is going to help remove the shame of the situation from the bullied child.

While you don’t want your child to be a doormat, you do want them to find other ways to deal with issues than violence when it is possible. Of course, if the bully starts hitting your child, your child should feel that they have full permission to defend themselves.

Many parents think that if they just ignore the problem, it’ll eventually go away. Unfortunately, if a bully is getting a response from your child, they may never stop until both are out of school unless you figure out how to stop it.

When you talk about the problem in the open, it’s going to be easier to solve. As a parent, you can’t ignore the problem because you’re responsible for your child emotionally and physically. Ignoring the issue may encourage even more bullying.

It is true that often a bully picks a certain child due to their reaction to the abuse. They easily push the child’s buttons, making them cry or get scared. The bully loves this type of interaction as it makes them feel powerful. But your child meanwhile feels powerless and likely suffers from some PTSD, which will enhance their reactions even more.

Instead, encourage higher self-esteem in your child so that they can resist reacting to the bully more effectively. Plus, encourage them to tell a teacher, find a buddy, and report to you anything that happens each day.

It might be tempting to call the bully’s parents and tell on the child. But the problem is that most parents don’t welcome this type of call and react poorly to it. You may even cause more problems for your child than they already have.

Instead, tell the school administration and let them know that you expect some form of action on the bullying to include a school-wide anti-bullying training for teachers, students, and parents. The bullying training can occur on a PTA meeting night so that parents know how to recognize signs that their child is being abused or that their child is being abusive.

When your child is being harmed, it’s easy to get angry. This is most especially true when a child is being bullied and you feel as if the school and administration (or the other parents) aren’t doing enough to stop it.

Instead of getting angry, start educating people. Offer to lead a program at the school to stop bullying. You can get these materials from various organizations including Stop Bullying Now. (http://stopbullyingnow.com/) Using this guide is going to make it easier to deal with a situation of bullying. If you think your child is being bullied, don’t delay getting everyone involved to put a stop to it. 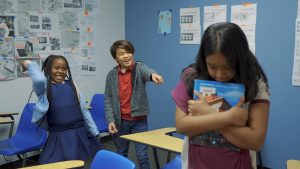 What Makes a Child Become a Target for Bullying?